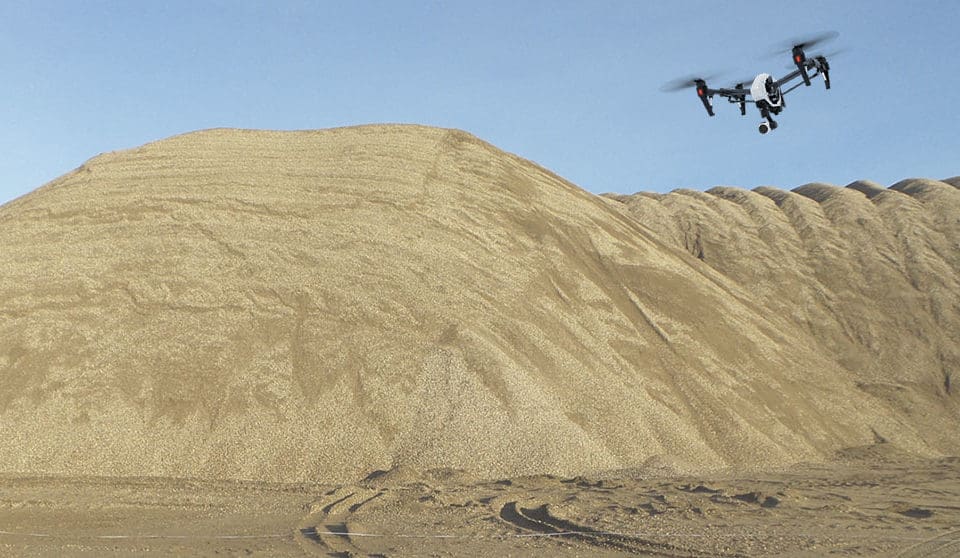 Many may still see drones as a hobbyist photographer’s toy, yet as seen in our numerous case studies, Unmanned Aerial Vehicles (UAVs) are breaking new ground when it comes to helping businesses to gain critical operational intelligence. One of the earliest adopters of drone technology has been the mining sector – an industry fraught with safety and accessibility challenges. Mining is also an industry which is often slow to adopt cutting-edge technology yet in a report two years ago, PWC found that nearly half of the world’s biggest mining companies were using drones for stockpile volume measurements.
<h4>Remotely Monitoring Stockpiles</h4>
One of the reasons many mining companies have been quick to embrace drone technology is down to ROI. Even the most basic of drone set-ups will almost always include a camera, meaning that many companies have been able to test out the technology without a large capital expenditure. When sites span hundreds of metres, it can be almost impossible to keep a watchful eye on every face, wall and access road on a daily basis. Drones provide site managers and health and safety teams with on-demand surveillance without having to spend huge amounts on static equipment. Yet it’s a drone’s data capture capabilities that have had the biggest impact on the profitability of many mine sites.
A drone’s camera doesn’t merely act as a method of capturing imagery. It can also be used for creating 2D and 3D images of environments and objects. It’s this process, known as photogrammetry, which allows for the accurate measurement of stockpiles and volumes to be carried out remotely.

Photogrammetry relies on waypoint navigation technology which allows for overlapping photos to be captured over a large target area. These photos, also known as orthophoto mosaics, have been shown to be capable of providing automated stockpile measurements which are accurate down to around 2-5%. It’s this level of detail that can mean the difference between tonnes of material being miscalculated which can have a huge impact on a company’s balance sheet.

There are a number of drones and payloads that are ideal for photogrammetry. One such drone is the Phantom 4 RTK, a drone that has been tailored made for photogrammetry. The 1 inch, 20 megapixel CMOS sensing system in the Phantom 4 RTK can achieve a Ground Sample Distance (GSD) of 2.74cm at 100m altitude. You can also use the Matrice 200 series of drones alongside the LiDAR series. With the Matrice 210, and Matrice 210 RTK’s ability to have dual payloads, you can capture two data sources at the same time.
<h4>Safer Stockpile Monitoring</h4>
Having an accurate inventory record isn’t just about stock shortages or excesses. It can also be safety critical in any environment dealing with large quantities of heavy or loose materials. Stockpile collapses cost companies dearly in terms of production and delivery delays, not to mention the severe consequences if an operative is injured. Using drones, site operators can gain a better perspective of ever-changing size and form of a stockpile to ensure that ‘tipping point’ is never reached, without having to expose workers to the heavy machinery and constant stream of vehicles found in a stockyard.
It’s not only stockpiles and inventory management which benefit from drone mapping on an extractives site. Waste dumps and safety berms can also be remotely measured and monitored to ensure that structural integrity remains sound and uncompromised.
<h4>Stockpile Volume Measurements Using LiDAR</h4>
A drone isn’t a one-trick-pony. Thanks to ever-increasing payload capacities drones can now be used with additional sensors to allow for even more in-depth surveys to be carried out. Although requiring a larger capital investment, drone mounted LiDAR systems can measure volumes and quantities down to millimetre accuracy in minutes. When you’re talking about hundreds or thousands of tonnes of materials, a millimetre can mean a large amount of missed revenue.
Using drones for stockpile volume measurements can greatly improve inventory management for extra ctives operations such as mines and quarries as well as in other industrial environments where bulk and loose materials are handled, such as recycling and waste plants.